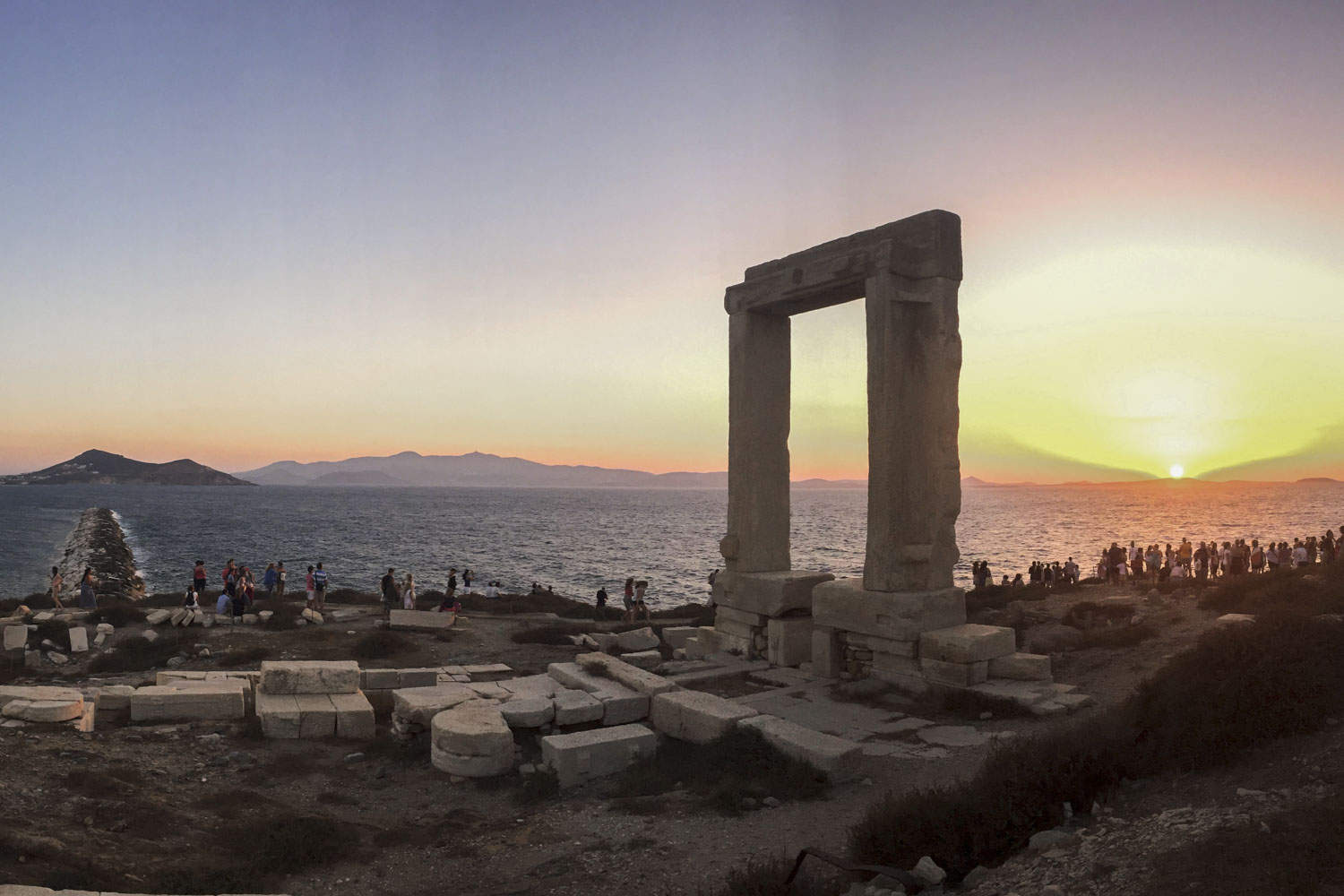 Naxos. The queen of the Cyclades. The biggest of the cycladic island group and as charming as any. It’s natural landscapes and impressive ancient sites draw visitors of all types – couples, young people and families. There are many sides to this fascinating island. These are the best things to do in Naxos Greece.

Naxos is still relatively underrated, especially compared to its close neighbours in the Cyclades. I must admit, I often prefer islands like Naxos over the more renowned and popular greek islands.

As the boat approaches the port of the main Chora and old town, the Portara greets its visitors. A huge marble gate, still standing, as if untouched as the rest of the temple of Apollo lies unfinished and ruined. A monumental sight in itself, and a unique welcome to the heart of the cyclades. And to visitors it’s only just the start. With so much to explore here, these are the highlights – the best things to see and do in Naxos.

1. Explore the Kastro of Naxos

The once impenetrable Kastro of Naxos is right in the heart of the old town. Make your way through the narrow alleyways and steep steps and, as you climb, you feel slowly transported back in time. As you approach the Kastro, the town’s modern white-washed cycladic walls are transformed into striking, old venetian brickwork.

Enter through one of the many gates and it becomes apparent how well preserved this medieval fortress is. It now operates during modern day-life. Alongside the museums, courtyards and churches, there are shops and houses. Life goes on here and the heritage and history of the place is just part of everyday. Be sure to visit the Venetian museum, folk and history museum, and the church of Panagia Theoskepasti.

2. Catch a concert in the Kastro

Whilst up in the kastro, you could easily spend the whole afternoon wandering the winding streets. The views across Naxos out into the Aegean and the Portara are worth the visit alone.

Easily one of the most unique things to do, though, is to catch a show within the Kastro in the evening. They take place in an open “theatre” – one of the old buildings of the fortress. Roof gone and parts of the walls missing only serves as a window to awesome panoramas across the Chora. That along with the moonlit, starry sky and nice music, lighting and ambience. What more could you ask for?

The grand marble Portara (meaning “gate”) is the symbol of Naxos. An inescapable landmark greeting all those that sail into the island’s Chora. Built in the 6th century, it is the grand entrance to the temple of Apollo, which was never finished. What remains are the foundations and this 6-metre high imposing gate – made up of 4 huge marble slabs each weighing over 20 tonnes.

Cross the narrow causeway from the old town leading to the temple. Walk amongst the ancient site and soak in the beauty of Naxos. Visit at sunset for an even more dramatic backdrop.

This 4km long beach is one of the most popular in Naxos and Greece overall. Mainly due to its soft, light sand and clear turquoise waters stretching endlessly. Walking from one end to the other, starting from Maragas and ending up at the town of Plaka would take you an hour. On the way, you’ll pass beach-front cafes, beach bars, tavernas, sunbeds and umbrellas.

The beach is perfectly clean and, although popular, never feels overcrowded. There are organised sections but the majority is non-organised. Hence you can either choose to go with the crowd or happily find a quiet spot of your own. The beach seems calm, in places unspoiled and in some parts, a bit more lively. No wonder why there are so many apartments, villas and a few resorts set in this area.

Right at the end of Plaka beach, on the Agia Anna end is taverna Paradiso. And paradise it most certainly serves – plates of them in fact. With seating on the beach as well as it’s front courtyard. A great little place for a laid back lunch or evening meal.

A must go, especially after a long hard day beaching the heck out of Plaka ;). Great views of the sunset and even better seafood, kolokithokeftedes (fried zucchini balls) and moussaka. All washed down with some tsipouro or ouzo – doesn’t get much better. And you won’t find a better meal and setting than here. I wish I could go back right now!

6. Visit the village of Apollonas

Apollonas is a beautiful seaside fishing village on the northern coast of Naxos. It has a charismatic small village/town feel and is a popular day trip for those visiting Naxos.

The village has two beaches. One of them is a small, sandy and calm bay.  The other a much longer stretch of beach with wavy waters. The beach front is lined with shops, cafes and tavernas, offering fresh seafood.

Typical Greek cycladic colours and architecture adorn this village, perfect for an afternoon stroll, a seafood lunch and a nice dip in the refreshing waters.

A huge marble statue found near the town of Apollon. This impressive statue lies unfinished (seems to be a common theme in Naxos). It measures more than 10m in length and over 80 tonnes in weight, so you can see why the ancients thought to leave it in its prone position! It dates back to the archaic period, around 6th century BC, the same time as when the construction of the temple of Apollon was started.

In close proximity to the town and sanctuary of Apollon, it was Initially thought to be a statute of the deity himself. Since then, the common consensus is that it actually represents a “Kouros”, a popular type of statue of a naked young man with his arms to his side. Stand next to this huge statue carved out of Naxan marble, one of the most significant types in ancient Greece and you’ll certainly feel insignificant!

8. Try the traditional cuisine of Naxos

Naxos, as a Greek island, is famous throughout Greece for a few things. It’s potatoes, dairy products and kitron liqueur are consumed throughout Greece. So, when you visit Naxos, what better than to sample these well known foods first hand.

Fried potatoes are a great accompaniment with any meal,a dn you honestly wont find any better than in Naxos. They are of course hand cut and fried fresh to order. Cheese such as Graviera of Naxos is also well known and you will see feta substituted with this in the greek salads on the island. Also worth taking some back home if you have room in the suitcase!

The kitron liqueur, made from citron leaves is a famous Naxan drink. You can tell it from its bright green absinthe-like colour!

A windsurfing and kite surfers paradise. Mikri Vigla is a popular beach, at the southern end of Plaka. Water sports enthusiasts come for the wind and waves on the North side. Swimmers and sunbathers come for the soft fine sand and crystal clear cyan waters on the calmer southern side. The two beaches separated by the land of Mikri Vigla, and it’s studios and apartments

Similar to Plaka, the majority of the beach is unorganised, though there are still sections with sunbeds and umbrellas. This is one of the reasons why Naxos is a great island to visit. Good beaches but without the crowds.

An incredibly atmospheric taverna, cosy and casual, set in an attractive courtyard within the Chora. This family run taverna serves up the classic dishes and does the local dishes and ingredients very well, such as fried Naxan potatoes.

11. Visit the village of Filoti

Filoti is a beautiful village right in the centre of Naxos island. It is most easily reached by car, being a good 20km away from the Chora. As you pass the quarry, you will catch sight of the village of Filoti’s white washed houses. It is set amongst the hills and surrounded by olive tree plantations. The village is built in the foothills of Mount Zas, the tallest mountain in all of the Cyclades.

Spend the afternoon exploring the picturesque village, walking through its attractive alleyways. Take a moment to sit at one of the cafes or tavernas lining the central paved square. Called Gefyra (meaning “bridge”) and towered over by a great plane tree. Enjoy the traditional foods – Filoti is a great place to sample the famous Naxan potatoes and cheeses.

12. Hike mount Zas and visit the cave of Zeus

If you are up for a challenge, then hiking up mount Zas is well worth the time and effort. Not an easy climb by any stretch of the imagination, it will take you a good 2 hours in a group. The views at the top are simply amazing. From the summit you have a 360 panorama, not only of Naxos, but out into the Aegean. You will be able to spot numerous neighbouring islands including Paros and Koufonisi.

Along the hiking route you will be able to stop off at the cave of Zeus. In Greek mythology, this is where Zeus grew up after being outcast by his father Kronus. He formed his powers here and grew up to be king of Olympus and all gods. The cave’s stalagmites and stalactites can be explored.

13. Pay a visit to the Archaeological museum of Naxos

Within the Kastro at the top of the old town, you will find the Archaeological museum of Naxos housed in the central square. The museum houses Cycladic and Mycenaean collections dating back centuries and millenia. The countless archaeological finds of the island are displayed in the museum.

Everything from marble statues, ornate clay pots, wooden hand tools and patterned vessels are exhibited here. There are clay and marble vases dating back to 3000BC. Spanning that sort of timeframe, especially for such a small and humble island is unbelievable. Only in Greece!

Where to stay in Milos

The Hottest Greek Island in October

Visiting Greece On A Budget